on October 14, 2019
South Korea and the Philippines are two additions to the list of regions with confirmed outbreaks of African swine fever in Asia, which now totals nine.

Dr Dave Pyburn, vice president of Science and Technology with the National Pork Board based in Des Moines, Iowa, USA, said the global outlook for African swine fever (ASF) is not good. We are more than a year into the outbreak that started in China, and China shows no signs that they have the virus under control. ASF is considered endemic as it has been found in all the Chinese provinces.
“They are reporting massive herd losses in China, and I don't see that they're going to get this under control in the near future,” said Pyburn. “The news this last week and then again this morning is that now the Philippines has found African swine fever within their country so now they are positive. Also, this morning (17 September), South Korea announced they have tested positive on a couple of farms in South Korea. We now have nine total Asian countries that have ASF, and it continues to expand its territory.”
Pyburn said the top questions that he is asked are “what are the chances that ASF will enter the US?” and “what are the odds we're going to get it?”
“I can't answer that, but what I can say is the risk to us increases every time we have new countries, new provinces, new farms overseas that become infected. It means there's more virus circulating and there's more potential for that virus to be tracked into the US,” he said.


How could ASF enter the US?

While the pig populations in the Philippines and South Korea are nowhere near the US production level of about 125 million pigs annually, they still have sizeable pig herds. The Philippines produces about 12 million pigs, and South Korea has a reported herd of about 11.3 million pigs.
“In both countries, pork is a staple for them and it's going to affect consumption and the demand for pork in those countries. So it is big for them,” he noted. “One of the things about the outbreak in the Philippines is, of their 12 million pig population, it's estimated that 8 million are in backyard farms. That becomes a concern given the biosecurity of backyard farms, and it's going to make it even tougher to control [the virus] in the Philippines.”
Pyburn said it would be the same scenario in the US - backyard farms usually have fewer biosecurity measures in place, and therefore would be the higher risk farms for initially starting and continuing an outbreak.


What should US swine farmers do?

Producers should address biosecurity on their farm and ensure they're doing everything possible to not allow the ASF virus onto their farms. Top priorities:
“Get ready now and be prepared for a potential outbreak because we will have farms in an outbreak that are near positive farms that are at a high risk, but we'll also have farms that be a very low risk to no risk to move those pigs,” he explained.
The only way to continue pig movement is to use on-farm biosecurity data indicating transport movements on your farms and though diagnostic lab data from the pigs on your farms. Secure Pork Supplies is the National Pork Board’s program that helps producers gather all that data.
Go to securepork.org and it explains everything producers should do to show the level of biosecurity on your farm. 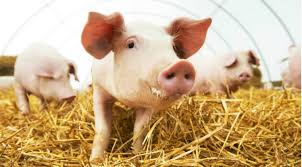 China, the world's top pork consumer, will secure sufficient supplies of the meat for upcoming holidays, including the Lunar New Year in late January, said an official on Wednesday, as concerns grow over a looming shortage and soaring prices. China's pig herd has shrunk by a third following a severe outbreak of deadly  African swine fever , and pork prices have surged since June on tightening supplies,  reports Reuters . Peng Shaozong, a manager in the pricing department of the National Development and Reform Commission, however, told reporters that supplies will be sufficient for this week's Mid-Autumn festival, as well as for the upcoming October holidays and Lunar New Year, which falls in January next year. China produces about half of the world's pork, but analysts have said output could fall by as much as 25 percent this year, and that imports will not be able to cover the gap. Peng sought to allay growing fears about the rocketing prices, saying the governme